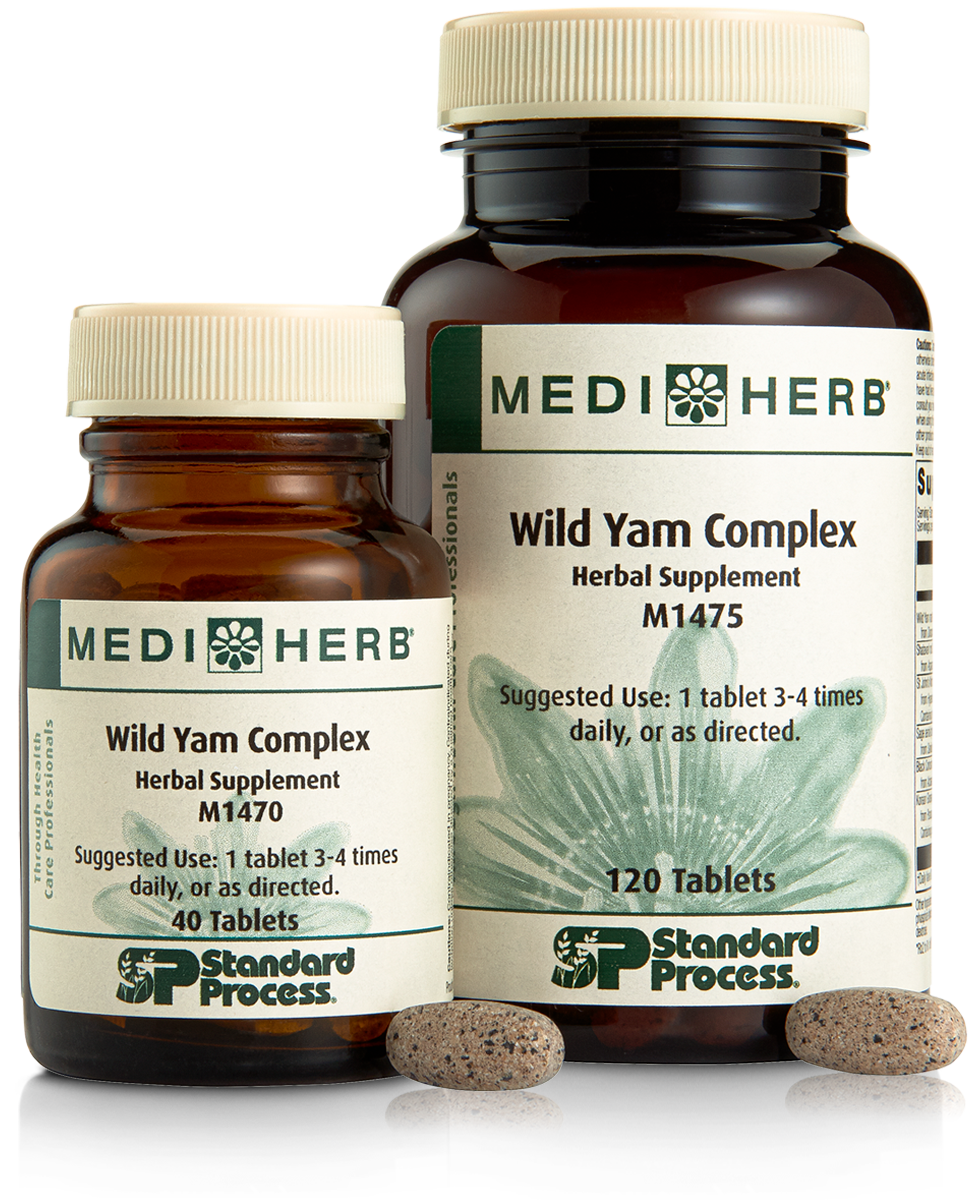 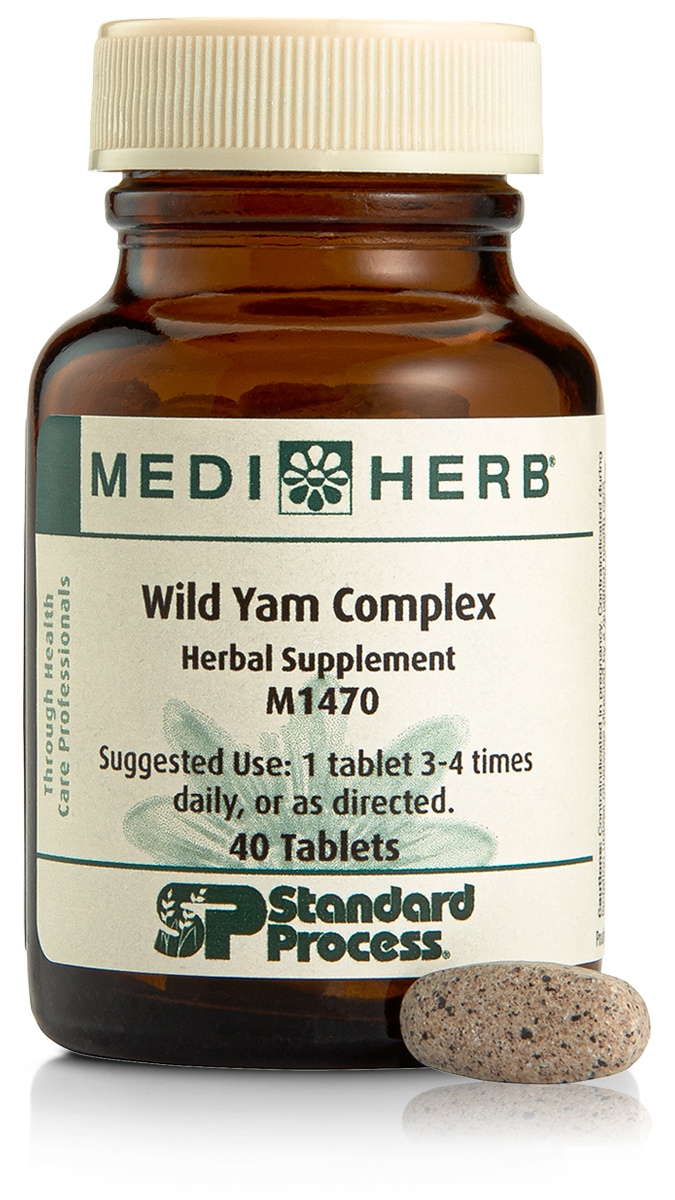 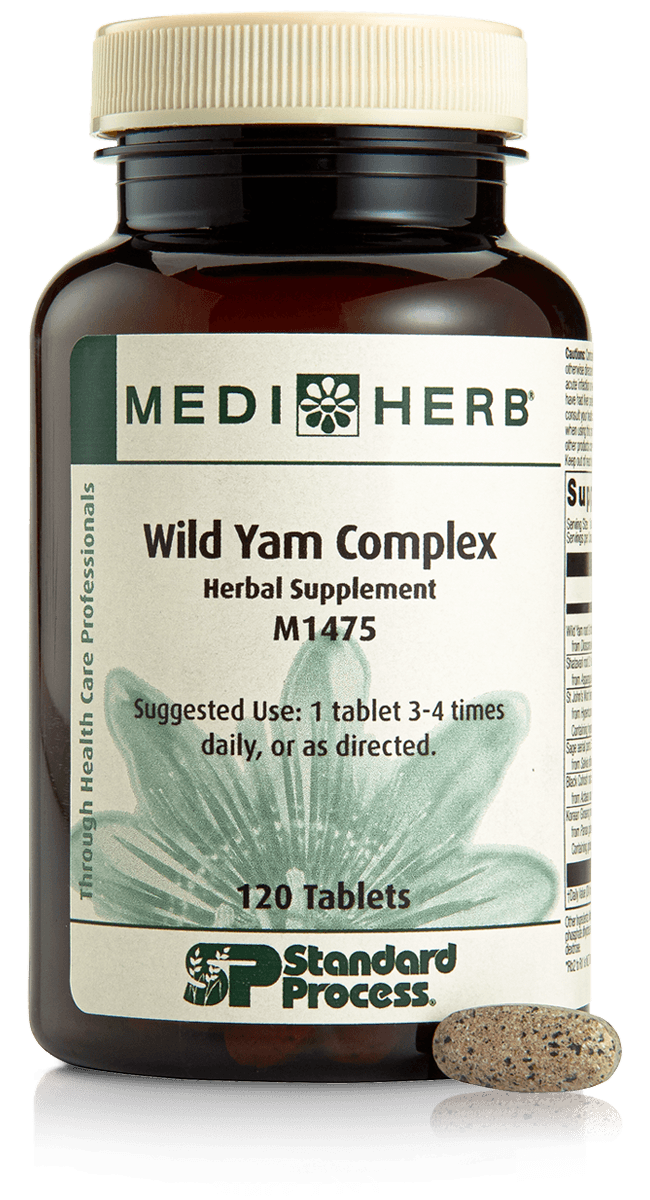 These herbs have been traditionally used in herbal preparations to:

This combination of herbs contains many compounds including steroidal saponins (such as shatavarin-I and dioscin), ginsenosides, an essential oil (containing monoterpenes, including thujone), triterpene glycosides, phenolic compounds (such as rosmarinic acid), naphthodianthrones hypericin and pseudohypericin (hypericins), flavonoids and phenolics. This tablet contains two herbs with standardized levels of key phytochemicals to ensure optimal strength and quality. The St John’s Wort component of this tablet is standardized to contain 300 mcg of hypericins per tablet, and the Korean Ginseng component contains 1.3 mg per tablet of ginsenosides (calculated as Rb2 to Rb1 is NLT 0.4 by HPLC).

There are some 600 species of Yam in the genus Dioscorea, many of them are wild species that flourish in damp woodlands and thickets. Dioscorea villosa, also known as Colic Root or Wild Yam, is a twining, tuberous vine native to eastern North America. The roots initially taste starchy, but soon after are bitter and acrid, nothing like the taste of Yam or Sweet Potato grown for the dinner table. Commercial Wild Yam extracts available for use as raw materials are often not Dioscorea villosa but instead Dioscorea opposita (Chinese Yam Root) which has a different phytochemical profile.

It is widely misconstrued that Dioscorea villosa contains diosgenin and many products have this as a statement on their labels. However it does not contain diosgenin, but rather the diosgenin precursors. Traditionally Dioscorea villosa was believed to contain predominantly dioscin, however, the origin of this assignment is unclear (dioscin is a steroidal glycoside precursor of diosgenin). The phytochemical profile of Wild Yam is poorly-defined and based on scientific literature from the 1940s. MediHerb undertook a project in conjunction with Associate Professor James De Voss, Chemistry Department, from the University of Queensland, Australia to investigate the phytochemistry. Commercially available Dioscorea villosa is in the form of dried roots, usually harvested at the end of summer or fall when the plant is dying back to its rootstock. It was found that these roots contained only very small amounts of dioscin, not the predominance as previously thought. The major saponin found in the fall harvested roots were in fact the furostanol-based saponins, methylparvifloside and methylprotodeltonin, while the spirostanol-based saponins, Zingiberensis saponin I and deltonin were the major saponins for samples harvested in summer. The storage saponins from the fall differ from the summer saponins by the presence of an extra glucose at the C-26 position of the diosgenin base structure. The two main compounds found in commercial material – harvested in the fall – are significantly different from dioscin by having an extra one or two glucose residues in methylprotodeltonin and methylparvifloside respectively. All of these compounds have been reported from other Disocorea species, however, the profile of saponins was different in the other species.

Caution: Contraindicated in pregnancy. Contraindicated during lactation unless otherwise directed by a qualified health care professional. Discontinue during an acute infection or fever. For other contraindications and cautions or if you have or have had liver problems, frequently use alcohol or take any medications, consult your health care professional. Avoid excessive exposure to UV irradiation (e.g., sunlight, tanning) when using this product. Keep out of reach of children. Store in a cool, dry place out of direct sunlight.